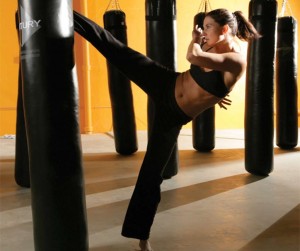 SELF DEFENSE PROGRAMS FOR MEN, WOMEN and CHILDREN

Muay Thai  is a combat sport from Thailand that uses stand-up striking along with various clinching techniques. It is similar to other Indochinese kickboxing systems, namely pradal serey from Cambodia, Tomoi from Malaysia, Lethwei from Burma and muay Lao from Laos.This physical and mental discipline which includes combat on foot is known as “the art of eight weapons” because it is characterized by the combined use of fists, elbows, knees, shins and feet, being associated with a good physical preparation that becomes a full-contact fight very efficient.

Defense Techniques in Muay Thai are Categorized in 6 Different Types: