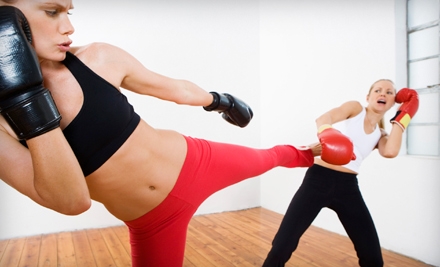 Muay Thai is a style of Kickboxing that originated out of Thailand. It is a Striking Martial Art that is known for its use of punches, kicks, elbows, knees, and use of the head. Hence the name, The Art of Nine Limbs. During the last 50 years, Muay Thai has received high recognition as a sport and has created one of the most popular and exciting forms of exercise and entertainment. It is the fastest growing Martial Art and definitely one of the most entertaining to watch. It is the preferred Striking Martial Art in the UFC and all reality fighting events because of its effectiveness. Learn how to defend yourself, Burn a ton of Calories, while having lots of fun!

The history of Muay Thai is interwoven with the history of the Thai people. A gentle, peace-loving people, for centuries Thais had to defend themselves and their land from aggressive powers. They developed a form of close, hand-to-hand combat best suited for the kind of rough-terrain battle they were fighting. Over time it became a rite of passage for Thai men to take up training in this martial art. King Naresuan the Great (1555-1605), one of the country’s most celebrated warrior-heroes, is believed to have been an excellent boxer himself, and it was he who made Muay Thai a required part of military training. Another milestone in the history of Muay Thai was the triumph of Nai Khanom Tom over 10 Burmese boxers in 1774. Taken captive after the Thai capital fell in 1767, Nai Khanom Tom was picked to fight before the Burmese king. After defeating ten of them in a row, he was freed and returned home a hero. This is why Muay Thai is referred to as “The King of the Martial Arts and the Martial Art of King”.

In the old days, Muay Thai was a dangerous sport, with no safety gear of any kind for the fighters, and only lengths of cords to wrap around the fists in place of gloves. Over the years rules have been written along the line of international boxing regulations. In recent years the sport has attracted a wide following outside of the country, and training facilities have been set up in countries as far as the U.S. and the former Soviet states. In 1995 the World Muay Thai Council was set up by cabinet resolution in 1995 to promote this national heritage at national and international levels. At a conference held that same year, 78 member countries voted for the establishment of a training school where all elements of Muay Thai would be taught. The Muay Thai Institute was founded in 1997.

“Its Ok For Girlz to Hit on Boys”

Muay Thai can help you get into great shape, relieve stress and help develop superb hand -eye coordination. The Tuff Girlz Training regimen includes many staples of Combat Sport Conditioning such as: running, rope jumping, body weight resistance exercises, plyometrics, core exercises, and weight training to increase – speed, agility, power, strength, endurance, and stamina. You will burn a ton of calories in this class while getting into fantastic shape. Muay Thai also utilizes the tools of Pad work, heavy bags, speed bags, uppercut bags, and many other unique tools not found in other combat arts. These tools help to sharpen the blade of the fighter or fitness enthusiast. Regardless of fitness level and or training experience, Muay Thai is a fun and effective way to get in great fighter shape as well as learn one of the Essential Martial Arts in Combat Sports. Beginners Welcome!

Not Everyone Wants To Be A Fighter but You Can Look Like One!

Start the New Year with a 1, 2, Knock Out! Get that Six-Pack you always wanted. Join our MMA FIT PROGRAM. With over 25+ Years Experience in the Martial Arts and Strength and Conditioning, Our MMA FIT PROGRAM utilizes Cutting-Edge Methods to help you Achieve All Your Fitness Goals. Increase Lean Muscle Mass, Incinerate Stubborn Fat Deposits, Improve Hand-Eye Coordination. Increase: Strength, Speed, and Stamina. Elevate your Confidence Levels. Learn Self Defense in a fun and exciting way! No experience necessary.

You Will Burn a Ton of Calories in This Class! Let the Professionals at Tokey Hill Martial Arts show you the Basics of MMA as it pertains to Fitness. During this class, you will train like a fighter without the worries of getting beat up. Learn how to deliver devastating – Kicks and Punches. Learn the basics of Grappling. Perform Throws. Learn how to break a fall and how to “Ground and Pound”.

Our MMA FIT PROGRAM combines the use of specialized equipment, pads, heavy bags, speed bags, MMA Drills, resisted exercises, body weight exercises, running, jump rope, and other exercises that will help sharpen your skills as an MMA FIT Enthusiast. Training never has to be boring again. You will lose fat while tightening and toning your entire body!