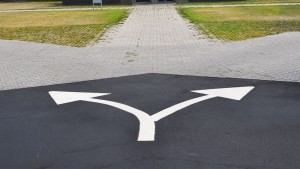 While many people use these two terms interchangeably, there is a difference between Muay Thai and kickboxing. Muay Thai wasn’t originally a sport, but a technique taught to soldiers to used if disarmed. It was called muay boran, meaning ancient boxing. It evolved and developed into a sport and was often used in fights by both the general population and soldiers. The Thai royalty changed the sport by modernizing the rules and teaching techniques over 200 years ago. Kickboxing, on the other hand, is a generalized term for fighting that uses kicking as part of the method of subduing an opponent.

You have an eight-point system with Muay Thai.

In kickboxing you use fists and feet to win your fight, which gives you four points of contact with your opponent. In Muay Thai, you use an eight-point system that includes the feet and fist, but also uses knees and elbows to strike. If you were to use knees and elbows in a kickboxing match, you might end up being disqualified.

You can attack below the waist in Muay Thai.

While no sport kickboxing sport, including Muay Thai, allows groin strikes, in Muay Thai you can kick or strike below the waist, which includes shin kicks. That’s one reason Muay Thai is considered better as a method of self-defense. It allows more moves to protect yourself. It’s also a reason that most people enroll in kickboxing classes to participate in the sport.

You can clinch and grapple in Muay Thai.

There’s a difference in the type of kicking used in Muay Thai, with many of the kicks getting power from the hip area and using the legs like a bat to inflict pain and injury on the opponent. The more exotic kicks used in other martial arts forms, such as spinning kicks, are seldom used in Muay Thai matches. Grappling and clinching are allowed in Muay Thai. For these reasons and several others, Muay Thai is considered a more complete fighting art.

Because of the differences between Muay Thai and American kickboxing, it’s easier for someone trained in Muay Thai to do well in kickboxing, but the reverse is not true for the trained kick boxer.

There are many different types of kickboxing. In a broad sense, Muay Thai is kickboxing but not all kickboxing is Muay Thai.

In Muay Thai, fighters shin-check kicks but seldom do in kickboxing. In fact, in Muay Thai checking a kick is important to the score.

The pace of a Muay Thai match is often slower and more patient than that of a kickboxing match, but both are equally draining.