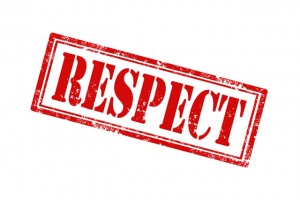 Respect is earned by focusing on the basics, practicing with vigilance and demonstrating skills. But part of the ritual in Muay Thai includes showing respect to an opponent, to the masters and in the ritual of Wai Khru Ram Muay, the wai,the sign of respect, is when the fighter puts his hands together as you would in prayer to show respect to others, which include opponents, teachers and ultimately God. While respect is earned on one level, it is also given freely as part of the basics of Muay Thai.

Showing respect occurs in a number of ways.

You show respect to other students and your teacher when learning Muay Thai by listening closely without interrupting. Showing anger, criticism and irritation with another not only shows disrespect, it’s a breach of the rules and can cause loss of face to the person demonstrating it. In order to be at your best you need to maintain a ‘Jai Yen’—a cool heart, and a polite disposition.

You will receive respect in your sport when you’ve earned it.

Simply signing up for classes will garner you personal respect from everyone in the class, but to get respect in the sport of Muay Thai, which indicates admiration, rather than polite treatment, you need to work and succeed. Training, listening, following instruction and practice are a few of the ways to develop your skills that will start you on the road to that type of respect.

Respecting certified instructors and masters is part of Muay Thai

Your instructor deserves not only your respect but the respect of everyone involved in Muay Thai. Masters and certified instructors have proven themselves to be superior in a sport that takes years to conquer. Even then, most will continue to learn throughout the rest of their life, hoping to improve and hone their already significant skills. While the masters of Muay Thai are experts, they are humble enough to understand there’s always more to learn.

Always work toward perfection. Even if you think you accomplished a move perfectly, if your teacher said you didn’t, go back to the start and learn it again until you’ve accomplished each movement perfectly. It is one way to show respect as you earn respect.

Working on the basics may not seem exciting, but it can take you to the top of your game. All moves start with the basics.

Focusing on developing strength and power can help you become victorious. It’s one of the important areas in muay Thai training.

Improving endurance will aid you in every match and promote the level of respect you’ve earned in a sport.