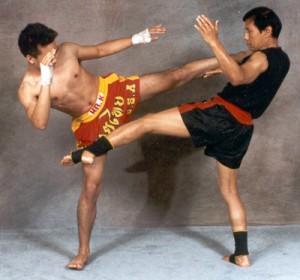 There are many variations to the Axe kick with each one useful based on the situation.

With the axe kick, you’ll be raising your leg and bringing down the heel on the opponent to maximize the damage you do. The heel is far more lethal to the opponent than the sole or ball of the foot and doesn’t leave you as open to injury. Doing the axe kick uses the hip and leg muscles, while also using the force of gravity and the natural inclination for the leg to be on the ground. It’s done from top to bottom, but still leaves you vulnerable to other attack, which is why practice is so important. There are a number of different types of axe kicks from traditional ones to jumping and spinning kicks.

Roundhouse kicks use momentum to add extra force to the kick.

When you do a roundhouse kick, the power doesn’t really come from the leg. In reality, it comes from the torso, hips and shoulders plus the momentum you develop. The leg is just the weapon or tool you use to deliver the power. Doing it right can cause a lot of damage to an opponent, but doing it wrong can wear you out. You’ll get much of the power from the pivot as you attempt to kick THROUGH the opponent. Follow through is important.

Timing your kick is one of the most important lessons to learn.

No matter how much technique you possess, timing is everything when you face an opponent. The person who anticipates their opponents moves best is often the winner of the match. Learn to anticipate when your opponent is most vulnerable and deliver the kick at that time, when he’s off guard. That means you have to practice quickness and not broadcast your movement to kick position.

Use kicks to assault all parts of the opponents body. Kicking techniques can be used to gain the advantage when used against the opponent to land on many different body parts from the head, trunk or legs.

Combining kicks with punches is a powerful tool. The kick gets the opponent off-balance and then you can land a powerful punch to complete the sequence.

Learn faking to disguise your next move. Fakes or feints can keep your opponent guessing. Watch the opponent carefully and when they start to react to the fakes, it’s time to strike.

Get a sense of timing by sparring. No matter how much you shadow box, it doesn’t provide the same learning experience that sparring does.