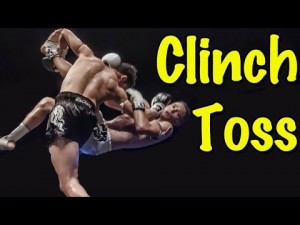 Some of the dramatic moves of Muay Thai look like a lot of fun, but any time you participate in this sport, it’s the basics that will make you or break you. You’ll find a few of the clinching drills you should know to be at your best and ready for even the most aggressive opponent. With this sport, you can’t hesitate or you’ll lose, so being ready for anything is the best way to prepare for battle. There are an infinite number of maneuvers you can do that will have you winning, so learning them all only comes with years of practice and dedication. Here are a few you’ll find helpful.

Keep your center of gravity low and avoid standing tall.

While standing tall is important for using your knees to deliver a blow to the face, it’s not a stable position for most clenches. It allows your opponent, particularly one with a lower center of gravity to get the advantage. You have to lower yours, which means keeping your head down and knees bent. You can get the advantage by moving in on your opponent rapidly, putting your gloves on his biceps and pushing, then go for the head while he’s off balance and have your arms in his way, making him unable to counter-punch. In this instance, speed and the element of surprise are important, so practicing this move until its second nature is the only way to be effective.

A knee to the head is a potent weapon.

You need to insure your opponent is as powerless as possible. You can do that by starting the clench with one hand behind his neck pushing his arm to the outside and the other intertwined with his arm, with your hand on top. That leaves him more vulnerable and unable to elbow you. Expect him to counter by snaking his his arm on top. That’s the point where you take charge, pushing his head down and giving a solid knee to the head. This move is also quick and anticipates the opponents natural progression of moves.

Your elbows are powerful weapons in a clinch.

Planning and practicing effective use of the elbows in a clinch is important. A blow to the face from an elbow can be far more devastating than a punch thrown and with proper practice, will help you win the match. Put one hand behind the opponents neck placing it to insure he can’t throw a punch and position the other on top of his arm. When the time is right, knock down that arm with one swift move and elbow the face of the opponent.

Don’t forget about clinch sweeps when you’re practicing Muay Thai moves. They can be powerful tools to win you points.

Hesitation to make moves during a clinch is one of the biggest problems faced. If you hesitate, you often lose not only an opportunity to strike a blow, but many times the match.

There are a huge number of moves you can do in a clinch. Find a few and perfect them, then add more as you go. Make sure you practice enough you can do them quickly without hesitation before you move on to the next one.

Get your body in shape for clenches by practicing drills often.