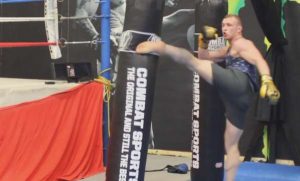 American kickboxing developed later than many of the kickboxing sports.

While karate and other martial arts became popular in America, Western boxing was also supreme. American kickboxing is a marriage of the two sports. It has elements of both karate and boxing. The development of the sport started in the 1970s, when all types of kickboxing became popular. Because many Americans had only experience with Karate, they weren’t used to expending the energy for the kickboxing rounds. A ten round fight was a pure struggle.

Those involved in Karate seldom used gloves, but that soon made those people turn to training programs created for Western boxers. Changes in the number of rounds for sparring, using full contact sparring and taking punches to the upper body and head was all part of the training. That training improved them in the ring and helped develop the modern version that grew into American kickboxing. It spread to international circuits and became its own sport.

A few rules set it apart from other martial arts.

Hitting above the waist is part of American kickboxing. It can be done with either punches or kicks. There’s no use of knees or elbows in this sport. Few matches allow shins to be used either. Grappling and clinch fighting isn’t allowed. The use of sweeps is legal, but that also depends on the bout and referee. The bouts normally last 2-3 minutes. There are as few as three and as many as twelve with a minute rest between the rounds.